About The Roti Shack

Christina and David are the owners of The Roti Shack 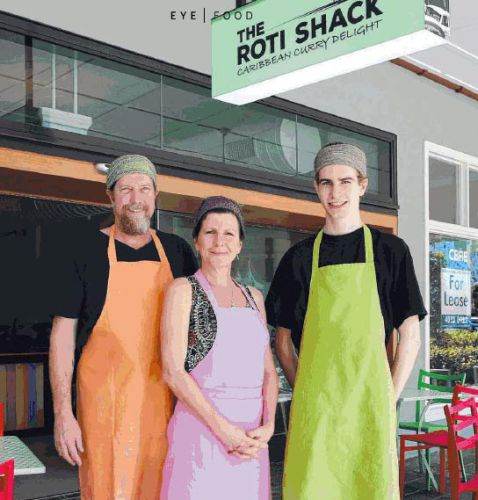 Employ their son Lucas on a full time basis whilst their daughter Candice helps out with social media exposure and fills in when needed. Christina’s auntie is from Trinidad and taught Christina the recipes more than 30 years ago.

The Roti Shack sources only the freshest ingredients and everything is made from scratch on the premises daily, including the roti bread. Customers can see the creation of the roti from start to finish in the open plan kitchen. They only use free range chicken and local beef and cater for vegans with the vegetarian range. Even the Trinidad chillies are grown at home to create a flavoursome chilli sauce that compliments the curry flavours perfectly.

Apart from presenting at the Roti Shack to order, alternative ordering methods are direct phone orders and uber eats. The Roti Shack also has a facebook page and reviews can be viewed on trip advisor and our google page.

The Roti Shack is a Family Run Business 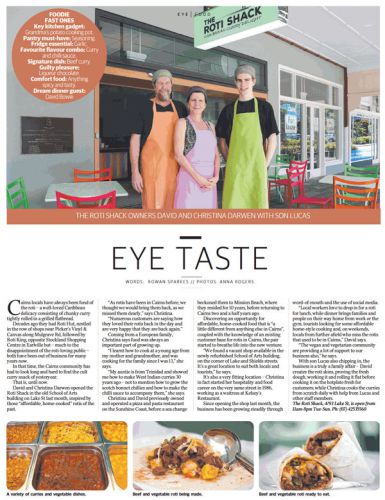 Cairns locals have always been fond of the roti — a well-loved Caribbean delicacy consisting of chunky curry tightly rolled in a grilled flatbread.

Decades ago they had Roti Hut, nestled in the row of shops near Picker's Vinyl & Canvas along Mulgrave Rd, followed by Roti King, opposite Stockland Shopping Centre in Earlville but - much to the disappointment of the roti-loving public - both have been out of business for many years now.

In that time, the Cairns community has had to look long and hard to find the cult curry snack of yesteryear.
... That is, until now ...

David and Christina Darwen opened the Roti Shack in the old School of Arts building on Lake St last month, inspired by those "affordable, home-cooked" rotis of the past.

"As rotis have been in Cairns before, we thought we would bring them back, as we missed them dearly , " says Christina. "Numerous customers are saying how they loved their rotis back in the day and are very happy that they are back again."

Coming from a European family, Christina says food was always an important part of growing up.

"I learnt how to cook at a young age from my mother and grandmother, and was cooking for the family since I was 13," she says.

"My auntie is from Trinidad and showed me how to make West Indian curries 30 years ago — not to mention how to grow the scotch bonnet chillies and how to make the chilli sauce to accompany them," she says.

Christina and David previously owned and operated a pizza and pasta restaurant on the Sunshine Coast, before a sea change beckoned them to Mission Beach, where they resided for 10 years, before returning to Cairns two and a half years ago.

Discovering an opportunity for affordable, home-cooked food that is "a little different from anything else in Cairns", coupled with the knowledge of an existing customer base for rotis in Cairns, the pair started to breathe life into the new venture.

"We found a vacant shop available in the newly reburbished School of Arts building on the corner of Lake and Shields streets. It's a great location to suit both locals and tourists," he says.

It's also a very fitting location - Christina in fact started her hospitality and food career on the very same street in 1986, working as a waitress at Kelsey's Restaurant.

Since opening the shop last month, the business has been growing steadily through word-of-mouth and the use of social media.

"Local workers love to drop in for a roti for lunch, while dinner brings families and people on their way home from work or the gym, tourists looking for some affordable home-style cooking and, on weekends, locals from further afield who miss the rotis that used to be in Cairns," David says.

"The vegan and vegetarian community are providing a lot of support to our business also" he says.
With son Lucas also chipping in, the business is a truly a family affair — David creates the roti skins, proving the fresh dough, working it and rolling it flat before cooking it on the hotplate fresh for customers; while Christina cooks the curries from scratch daily with help from Lucas and other staff members.